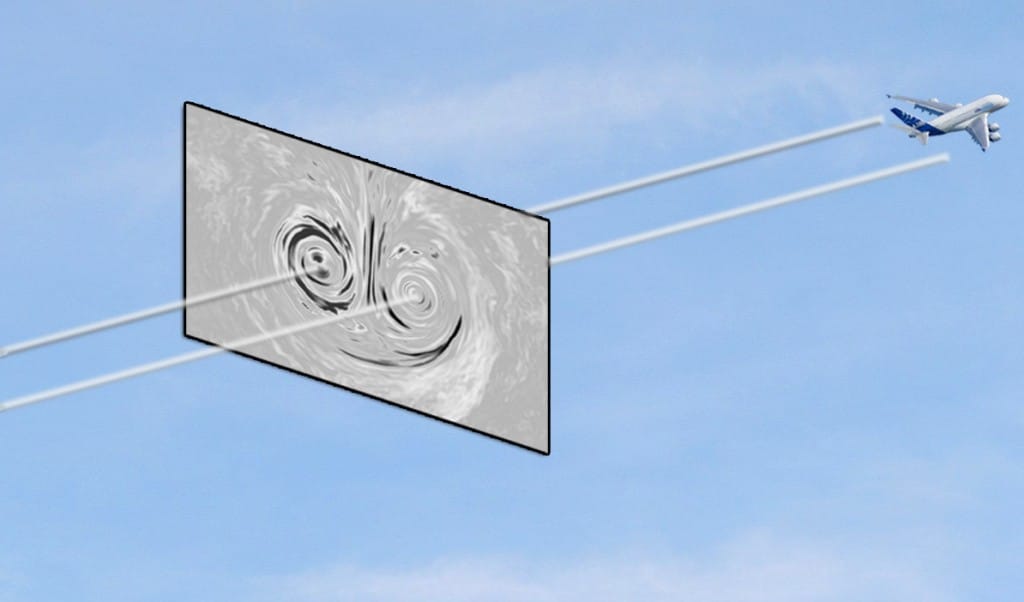 The wake of an aircraft is composed of a pair of counter-rotating vortices, which are inherent to the generation of lift by the wing. Those vortices are quite persistent and can live up to several minutes after the aircraft has flown by. A following aircraft that would enter such a wake could experience a strong rolling moment or a strong downwash velocity that could be hazardous. The separation minima imposed between aircraft are based upon this wake turbulence hazard. Nowadays, air traffic increase has made these wake vortex separation standards a limiting factor on the capacity of the busiest airports. Reducing the separation minima, while maintaining or even improving the current safety level, hence represents a significant economic interest. Using its strong expertise in wake vortex encounter risk assessment and its simulation tools, WaPT offers various solutions to mitigate this major challenge in Air Traffic Management (ATM).

Currently, aircraft are divided into four categories according to their weight. The separations are established following two principles: i) heavier aircraft generate more dangerous wakes; ii) heavier aircraft have more control authority to recover in case of a wake vortex encounter. However, weight is not the only parameter of influence. Dividing the aircraft into more than four categories, using a more appropriate metric, would provide controllers with more flexibility to optimize air traffic management and hence increase the airport capacity. Using its expertise and modeling tools, WaPT provides scientific argumentation for such re-categorization.

Wake vortex behavior (transport and decay) is strongly related to the ambient meteorological conditions (i.e., wind, turbulence and temperature stratification). Establishing dynamic separation procedures that also depend on the atmospheric conditions would hence allow significant capacity increase when the conditions are favorable. Using its analysis and modeling tools, WaPT helps you to establish new separation procedures and to certify them.

Depending on their traffic mix, typical runway operations and atmospheric conditions, the international separation standards could be over-conservative for some specific airports. Relaxing some of the separation standards in those airports are hence safe and allow capacity increase. Using its simulation and analysis tools, WaPT provides safety evidence for certification of such concept. The WAKE4D simulation tool was, for instance, used for the certification of the WIDAO concept at Paris-Charles de Gaulle airport.

Before being released to the market, a category has to be assigned to any new aircraft. Using its analysis and simulation tools, WaPT provides safety evidences to characterize the aircraft wake and compare its related risk to the wake of existing aircraft.

Wake vortex encounters are regularly reported by pilots. Using WAKE4D, WaPT is able to replay the encounter situation to determine its causes and envisage alternative scenarios that could prevent it to occur. This would enable an air traffic management adaptation to increase the global safety level. WaPT also provides the WAKE4D as a wake predictor for, on-board or ground-based, wake vortex avoidance systems.