The development of wind energy, and the associated size increase of wind farms, will pose several technical challenges in the near to mid- term. The main challenge in wind energy production design is to minimize the Levelized Production Cost (LPC), which is the ratio between energy production cost and economic lifetime. Using its simulation tools (VPM4WIND and BigFlow4WIND), WaPT offers various solutions to major wind energy challenges. 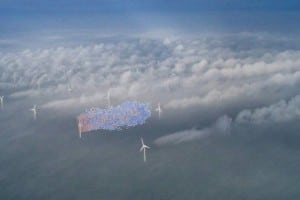 A most fundamental issue is the dynamics of the wakes. A wind turbine operating in the wake of another has a reduced power production (up to 40%), a higher unsteady loading and a shorter mean time between failures. As they extract momentum and power from the wind, turbines generate vortical structures that interact, increase the turbulence of the flow and can impinge upon a downstream rotor. The initial configuration of these vortices depends on the type of wind turbine considered and on its operating condition. WaPT uses its tools to accurately and efficiently simulate the wake of a wind turbine. This allows the optimization of the positioning and operation of the turbines in a wind farm depending on the considered wind turbine type and local meteorological conditions.

Operation and maintenance (O&M) costs constitute a significant part of the total annual costs of a wind turbine. Being able to prevent turbine failure using forecasts is hence of primary interest. Most of the turbine failures are related to fatigue. The unsteadiness of the blade loading is linked to the turbulence of the wind and of the surrounded turbine wakes. WaPT tool provides the temporal evolution of the forces experienced by the blades, required for fatigue evaluation.

Nowadays, control technologies have been implemented to reduce the load effects on a wind turbine and to increase its power efficiency. Due to wake interference among the wind turbines, the power efficiency of a wind farm can be significantly reduced. New control schemes hence must consider the wind farm as a whole rather than the sum of individuals. WaPT is able to test a control scheme using its simulation tool that accurately captures the wake effects.